Frankly this gadget was hard to fit into this blog but somehow it needs to be here. It is actually two devices. The X-Fi Notebook is a PCCARD soundcard with built-in wireless transmission using the other part of the equation; the Creative Wireless Receiver. 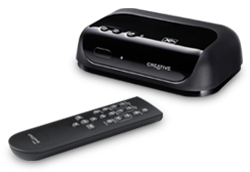 With the receiver it should be possible to transmit music to 4 discrete zones, each equipped with one. In other words: With a decent notebook, an X-Fi Notebook and sufficient receivers, you could build a multi-zone streamer fairly easily. The soundcard itself supports resolutions up to 24bit/48KHz and works pretty much as any other soundcard.