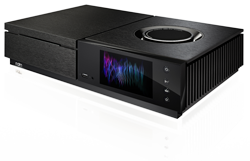 Honey, I Shrunk Our Mu-So 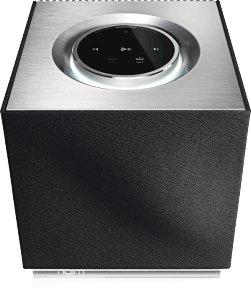 Naim managed to shrink the Naim Mu-So into a cube of 20cm3 and called it… wait for it… Qb. No ill feat on the shrinking side. Slightly off their rocker on the naming ditto. Specs are roughly the same as usual albeit given the smaller form factor having smaller speakers and with less to drive, a smaller set of amps. The high and mid drivers are positioned in an X-Y configuration for compactness and the subs appear to be push-pull. The mother Mu-So is stunning to behold already. With these little babies dispersed around the house, you are likely to win an award in your local interior decoration magazine and sound good winning it. Multi room sound took another leap today.

Naim Mu-So In The Lottery 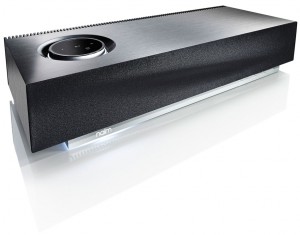 Naim have put a Naim Mu-So up for draws among customers who purchase a Hi-resolution digital album from their music shop. The Mu-So is Naim’s take on a wireless, monolithic speaker to compete with products such as B&W Zeppelin. Inline with Naim’s usual graphic style, the Mu-So has a visual punch unlike most other products in its genre. It streams everything up to 24-bit/192kHz Flac on a wired connection and plays it back at 75W per channel. Unusual among its peers it supports multi-room streaming with more Mu-Sos connected and is controlled by either an iOS or Android device or via the [equally] unusually rudimentary remote that comes with the package.

I should kick, being kick’d; and, being at that pass…

— you would keep from my heels and beware of an ass

It has been a long time since my last update but following a hiatus often comes a time of exhilarated mania manifesting itself in this oddly named blogging kickstart.

We have used a combination of iTunes, Squeezebox and Foobar2000 for quite a few years now. Moving to a new house in 2012 caused a slight shift towards true multiroom and the Squeezeboxes became the centre of our musical universe. This, however, also accentuated a couple of shortcomings with Squeezebox and thus instigated a possible change of system.

Given its outrageous price tag, Linn is out of the equation for us. The next system in line was the Naim Uniti which is more within reach albeit still too expensive in a multiroom setting. The choice ended up being between keeping the Squeezebox, solving the problems we have, moving to Sonos or jumping to the relatively new Simple Audio lead by former Linn MD Peter Murphy. So far I have tested a 5 room Sonos setup against Squeezebox. The plan is to have a go at Simple Audio next and then post a detailed account of my experience with all three and where they excel and, conversely, fall short. So stick around for brand new spark of life following this virtual defibrillator.

With the UnitiServe, British Naim completes their Unity system. The UnitiServe is a Windows XP Embedded based media server with a built in Red Book CD drive. The server supports a multitude of audio formats, including Flac at a resolution of up to 24bit/192KHz. The innards include parts from equally cool British lads, Digital Fidelity.

The main idea, of course, is for the UnitiServe to act as a server for multitude of NaimUniti and UnitiQute clients already casually spread across your house. It supports streaming unique content to 6 simultaneous receivers. But being a full fledged DLNA server, it will do the biddings of any compliant device on your home network.

The UnitiServe comes with 1TB of disk space or, if you so prefer, with only a 16GB SSD disk, requiring a NAS for its data.

The people who gave us the NaimUnity last year have gone and done it again. This time with a cute little device aptly and cleverly named The UnitiQute. The main difference from the NaimUnity is the absence of a CD transport. In other words, the UnitiQute is for those who don’t care about perloid plastic discs or those who have a plenty of sound elsewhere and needs an extension.

The front is sleek and minimalistic and very Naim.  The back panel abundant with connectors for all things digital and a few analogue for good measure. The UnitiQute streams from internet radio stations and from network storage devices, be it a regular NAS or that equally sleek Naim HDX in the living room. In addition to networked music, the UnitiQute plays music from attached devices, such as iPods and USB harddrives.

Flac support of up to 24bit/96KHz puts it well in the clear with the competition. With a built-in amplifier yielding 30W of smooth niceness it is fairly self contained and should fit any small living area. Put an HDX in the study with your Focals, a Unity in the living room and a Qute in the bed room and your retirement is pretty much secured.

Naim have always been associated with extreme high end and baffled the world not long ago when they extended their product line to Bentley in-car hifi with KW-fed 11 speaker extravaganza and a price tag to fit the car. Well, none of that. Now Naim went out and did an all-in-one package for the home sporting some rather nice specs and a compactness leaving little else to be desired.

The NaimUniti is a 50W integrated FM/DAB receiver with built-in CD transport and internet connectivity. It accepts USB devices, controls an iPod, reads CD-R discs and streams music from the network, including internet radio stations. Ogg Vorbis and Flac are supported as is Apple Lossless. On the input side there are 5 digital and 4 analogue. The latter including one specifically for the Naim Stageline phono stage for all that vinyl screaming for attention and so often forgotten in other solutions.