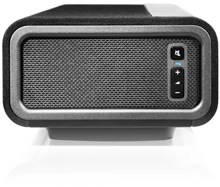 Since some time last year, when the Sonos Playbar name showed up in FCC findings, rumors have speculated on whether it was a TV-playbar for surround sound or something more like a under-cupboard-music-bar. Then last week Sonos lifted the curtain to what indeed turned out to be a surround sound bar for the TV.

The idea is pretty nigh hand, considering the ever present conundrum of wiring satellites and minimising the cable chaos in general. On its own, the Playbar gives you 2.1 system. Add a Sonos Sub and you automatically get 3.1 and add another 2 Play:3’s at the rear and you get full 5.1. Further than that it cannot go, but for most it should suffice. The other Sonos components cannot be paired with the Playbar for surround because they don’t have the sufficient wifi-specs for the low latency needed to sync with video. 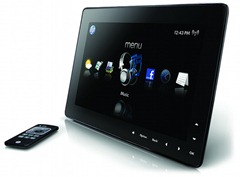 HP
* Possibly due to its Pandora support the HP Dreamscreen is not available in Europe. A pity considering its other properties.
Thomas Nielsen
March 25, 2009
1 Comment
Categories:

In itself the 1U Server seems fairly uninteresting but with the Kaleidescape Music Player in the mix it immediately turns into a hefty competitor in the media server market – even if it may appear somewhat uneconomical [diplomatically speaking].

The server comes in two versions. The 1U has 1TB of storage which can be extended to 4TB through modular drive bays. The 3U also starts with 1TB but can be extended to a stunning 12TB. The really stunning part comes when you start clustering the servers in which case you reach a mindboggling 100TB of music and/or DVD storage. Now – let us assume that a CD contains 700MB of data [which, believe my, is a very high assumption] and you divide that into 100TB, you end up with 150,000 CDs. If the Kaleidescape servers didn’t already drain your bank accounts, the CD purchases might.

The server can cover 45 discrete zones and perform up to 4 simultaneous rips. The Kaleidescape Music Player is one of your options for those zones as well as a number of full HD video components. The Music Player itself can handle 4 discrete zones at a resolution of up to 24bit/192KHz and sports a CD/DVD drive in its sleek exterior.

Someone at Crestron has nimbly avoided being called narrow minded for quite some time to come, hacking together this truly massive beast of features galore. Okay, it serves media; not just music but video as well. Video from DVD or Blu-ray as well as downloaded rentals. All this in full HD and 7.1 surround sound into 3 zones. Sound is served in a resolution of up to 24bit/96KHz and practically all formats known to man have been squeezed in.

Like all things Crestron, the ADMS can be operated from their control panels that also operate their home automation systems. The ADMS supports up to 1TB of RAID storage as well as NAS. It has Firewire, USB, S/PDIF, MMC and HDMI on the digital side of things, and a bunch of analogue ins and outs. All in an everything but discrete package.

It just occurred to me that I had forgotten one of the major players in the field of digital media – Apple. Last year they canonballed their Apple TV into the arena and it really does deserve a mention.

The device is, as the name so subtly implies, primarily a video streamer. It can stream from internet services such as YouTube or movie rental services, as well as from an iTunes equipped computer. More interestingly, at least within this blog’s scope, is its audio support. While it doesn’t do Flac or Ogg-Vorbis, it does support Apple Lossless, which is just as good, if somewhat proprietary. In fact, B&W Music Club offer their recordings in Apple Lossless as well as Flac. Otherwise you will have to convert from other formats which can be excruciatingly tedious.

An obvious short coming, is that it requires an iTunes service to stream from. That means that it cannot stream from your average NAS disk, if any at all, but requires a computer be turned on somewhere. Making up for that it sports a 40GB or 160GB harddisk to hold tracks locally.

Like a couple of other devices mentioned here, this is one of those almost-need-to-have things. It rips, plays and serves. There is a CD/DVD transport that supports ripping a CD to the internal 250GB harddrive. It can serve up to 4 concurrent streams and it can play DVD videos. Stylishly concealed on the front there are slots for memory cards and USB sources. It has it all… but why in the fury fires of marshmellow meltdown have they omitted lossless fileformats? It supports MP3 – that’s it. 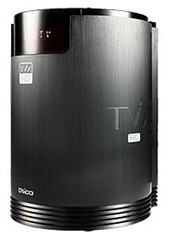 Korean DVICO has come up with a very nice modular package that supports streaming 1080i HD TV as well as audio, including Flac coded music. The clever thing about the TViX M-7000A is in part that it acts as a network device where you can add or remove media using standard operating system file operations such as Windows Explorer. Another part of the cleverness lies in its modular build. A DVB receiver matching the base of the device can be added in one simple operation in a fashion suggesting future add-on possibilities.

A slick user interface displayed on the attached TV makes for an easy but full fledged means of navigation. In the department for curious features it boasts a connection for an HDV camcorder.

The DSM-520 is a neat little media streamer that not only uses a TV connection to present the user with a rich menu system for audio playback, it also uses the TV connection to stream video in 1080i HD quality. Connections include wired and wireless ethernet and digital audio and HDMI outputs and support for surround sound.

In terms of file format it includes Ogg-Vorbis support but not Flac.