Behind a very long name lies a sleek, if somewhat conservative looking music server split in two – a desktop chassis with a CD-drive and a 15” or 17” touch screen. It supports 4 distinct zones that can be controlled separately, either from the touch screen or from a 3rd party remote [presumably via uPnP]. The server comes in 4 flavours from 250GB to 1.5TB. Files can be stored in lossless format and there is a digital output for attaching an external DAC at a resolution of up to 24bit/192KHz.

From the more unusual side of the feature set, we find not only CD burning but downscaling for iPod playlists and direct purchasing and download from Music Giants at full resolution. Not to mention the ability to play 1-second samples of arbitrary songs without interrupting whatever else is playing [except, of course, for the played sound sample].

It just occurred to me that I had forgotten one of the major players in the field of digital media – Apple. Last year they canonballed their Apple TV into the arena and it really does deserve a mention.

The device is, as the name so subtly implies, primarily a video streamer. It can stream from internet services such as YouTube or movie rental services, as well as from an iTunes equipped computer. More interestingly, at least within this blog’s scope, is its audio support. While it doesn’t do Flac or Ogg-Vorbis, it does support Apple Lossless, which is just as good, if somewhat proprietary. In fact, B&W Music Club offer their recordings in Apple Lossless as well as Flac. Otherwise you will have to convert from other formats which can be excruciatingly tedious.

An obvious short coming, is that it requires an iTunes service to stream from. That means that it cannot stream from your average NAS disk, if any at all, but requires a computer be turned on somewhere. Making up for that it sports a 40GB or 160GB harddisk to hold tracks locally.

This is not your everyday device! Period. Well, exclamation mark, really. It is not a streamer but a DAC with an integrated 50W amplifier with a tube driven preamp. It has an USB to connect to a computer and an assortment of digital inputs for other digital devices. Add to that 2 analogue inputs and you have a centrepiece for your audio system.

Now to the digital inputs. The Decco supports the Sonos system in a queer way. Not by interfacing to the proprietary Sonos network, nor by responding specifically to the Sonos remote. No, no. It has a cavity in the back where you can slide in the unpowered Sonos ZP80 and connect it by coax. Out of sight – out of mind, they seem to have been thinking. That’s a new one.

A household name in hi-fi circles and it can hardly surprise anyone that Arcam too have a media streamer. It supports lossless encoding, even if it is unclear which formats. The MS250 contains a 400GB harddisk and ripping capabilities. Add to that streaming to 4 simultaneous zones and that in itself should be a nicely equipped addition to most audio systems. What makes this apparatus truly stand out is not its digital connections but its analogue input. It can actually record or stream from an analogue source – nifty! Really; consider streaming from your turntable to 4 different rooms… nifty!

The Sooloos system consists of three different components. The Store which is the actual disk, the Source which streams the music to up to 32 zones and the Control which is a 17” touch screen with a built in CD drive [“Music isn’t all zones, terabytes, and signal-to-noise ratios”, they say]. Additional controls in the form of a 7” remote or a 7” satellite are available.

The Sooloos is the second system I have come across that uses mirroring on its datastore. Considering that hopefully more and more music will be downloadable in lossless audio formats the backup implications become more challenging; in case of a disk crash, how do you get your music back? A CD is straight forward. Buy it again and rip it once more. With music from, let’s say the B&W Music Club, you are in a jam. You cannot simply redownload music from previous months. A backup is actually a very good thing to consider in these days of digital distribution.

An interesting and rather important point with the Sooloos system is that CDs are ripped as one large file rather than individual tracks. This ensures that when songs or, perhaps more importantly, musical movements are played in order, they are played with exactly the gaps they were supposed to. If you play individual tracks they are seeked at runtime, so the obvious shortcoming of this method has been taken care of.

Like a couple of other devices mentioned here, this is one of those almost-need-to-have things. It rips, plays and serves. There is a CD/DVD transport that supports ripping a CD to the internal 250GB harddrive. It can serve up to 4 concurrent streams and it can play DVD videos. Stylishly concealed on the front there are slots for memory cards and USB sources. It has it all… but why in the fury fires of marshmellow meltdown have they omitted lossless fileformats? It supports MP3 – that’s it.

One of my favourite Shakespeare one liners [the better part of a verse, more like] is Juliet’s immortal outburst at Romeo; that had he been the nephew of Sid Vicious himself, he would have still been her one and only fancy… or as she put it: “that which we call a rose by any other name would smell as sweet”. It is obvious that John Stronczer, the chief at Bel Canto, had the core of this quote in mind when naming this DAC. Fortunately they omitted the name from the front – it looks extraordinarily slick in its purist attire.

Like the [near half priced] Benchmark DAC1 it sports a serious back panel with balanced XLR outputs. Specs tout a a 130dB dynamic range and an optimised and unbroken signal path without capacitors. The actual conversion is done with Burr-Brown PCM1792. The 5 inputs include USB next to the mandatory SPDIF and Toslink.

For an actual review, I strongly suggest you take a look at Stereophile’s article from last November.

With their MusicPal internet radio, Freecom shows a fairly classy looking albeit, barebone device. Like the Terratec Noxon, it is designed to stream internet radio stations, music from your computer or from a network attached disk. It supports Wav, WMA and MP3, and recognizes uPnP servers on the network. It has both wired and wireless network connectivity and outputs both to headphones and music system.

There are two things that makes the MusicPal stand out from the crowd, though. It can show RSS feeds on its small LCD screen and, what is really nifty, it has a built in alarm clock… you can actually use it to wake up in the morning with your favourite artist – figuratively speaking.

There is no support for Flac or Ogg-Vorbis. 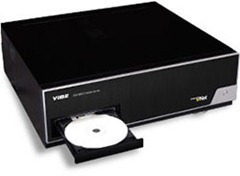 This is an awsome implementation of a dead simple concept. The Vibe Audio System consists of a media server with ripping capabilities. Depending on model, the server can handle 3 or 6 concurrent streams and thus serve 3 or 6 independent clients. The clever bit is the peripherals that all connect over ethernet. That includes an iPod dock, an AM/FM radio tuner, an analogue source decoder [complete with IR relaying] and a amplifier with a 7” touchscreen panel. Add to that software that installs on PCs in the network, letting you manage playlists and content, and you have a fairly impressive system. 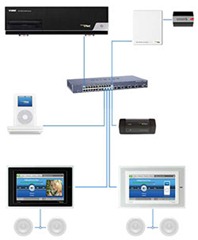 There is nothing fancy about the specs; suffice to say that streams are uncompressed PCM and the only supported file format is WAV. But it is not specs that should propel this device into legend – it is sheer interconnectivity elegance. It even rack mounts if you so choose.

As for the amplifiers they appear a bit crammed in their wall flush mounts; but man, do I love the appearance.

What I miss most in the specs is not surprisingly Flac support.  It could have helped save a bit of disk space but at least it uses PCM over MP3.

The Benchmark DAC1 is not a streamer; it is a digital to analogue converter – a DAC. All digital sources have a DAC. Some of those mentioned in this blog have Burr-Brown converters or other high-end DACs. But if that is not enough and you really crave a clear signal path from your digital media to your amplifier, you want a DAC that is built with a bit more love and caring. The Benchmark DAC1 is one such external DAC.

Some 5 years ago Benchmark Media Systems made [more of] a name for themselves by releasing the DAC1 with a list price of less than $1,000. It boasted a 24 bit / 96KHz resolution, balanced outputs and generally rave reviews for perfect sound. Half a year ago they went on to release this new model in a line of successors, which as the name implies, offers a USB input port [supporting 24 bit / 96KHz] in addition to the SPDIF and Toslink ports [supporting 24 bit / 192KHz] already there. With the added USB port the DAC1 can now serve as a sound board for your computer as well as replace the built-in DAC in your media streamer; provided, of course, that your streamer has a digital output.

At a little over $1,200 the DAC1 USB is still an affordable option like its predecessor was before, even if it is a lot of money.