There are several software media centers available that run on ordinary computers. Depending on your operating system, the choice is more or less broad, in terms of sound quality and features. This is an attempt to describe a four such solutions, all catering to different audiences.

There are a number of features that I have a hard time living without, but few are met by all four solutions:

The applications tested are these: Apple iTunes, Foobar2000, WinAmp and J. River Media Center. I will have a go at four other media players in a later article. 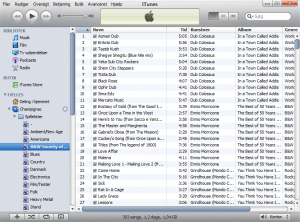 If you have an Apple product in your house, chances are you have iTunes installed as well. Products such as the iPod Touch, Apple TV and indeed the iPhone, pretty much need iTunes to stay in sync. Apple iTunes has many neat features and equally many annoying dittos.

One often foreseen feature of iTunes, is Airtunes. Airtunes is a communication protocol supported by Apple’s wireless access points, Airports, and by Apple TV. Airtunes lets iTunes detect devices through the Apple Bonjour service and stream music to these devices. Simply put, you can view Airtunes capable devices as remote speakers and select them instead of (or in addition to) your local PC speaker. It even lets you play a song on multiple locations simultaneously and, let’s not forget, in sync. It does not let you play different songs on different devices, at least not from one computer, and there is no way you can forcibly take over an Airport if it is already servicing another iTunes client. But at a very low cost, you can actually have a functional multi room system.

The user interface is sleek, as you would expect from Apple. It does, however, have some serious short comings. Having no tooltips whatsoever, you are forced to click everything to learn what it does. More importantly, you have to read a lengthy document, to learn the keyboard shortcuts.

In terms of recognised file formats, iTunes does not impress much but does support lossless audio through the Apple Lossless codec, which by the way, is also the format used to communicate with the Airtunes clients.

Remote control support in iTunes is excellent and terrible at the same time. The excellent part is the Remote App for the iPod Touch and iPhone. It is an App that looks exactly like the iTunes App but lets you connect to any running iTunes on your network and use it as it was on your phone, only playing the tracks on the computer or through Airtunes. That is pretty darn nifty. It works brilliantly and looks awesome. Remote controlling an iTunes client from another computer, however, is an entirely different matter. There are a few third party attempts but they are cumbersome and unintuitive.

ITunes maintains its own library of metadata and offers to maintain your actual files as well, if you so choose. There is not much to say about the library itself. If, for instance, you use smart playlists, it is rather responsive and works as it is supposed to. When running multiple clients, however, iTunes fails miserably. It is not possible to share your metadata on the network. All clients must import all files to their own libraries and maintaining metadata suddenly becomes tedious at best. Add to this that iTunes does not watch folders for changes, and you have a regular nightmare. A third party product called Itunes Folder Watch does wonders at doing exactly this – watching folders. The man behind this product, by the way, has a new thing brewing called Muso. Muso is a media database that first and foremost acts as a manager. It can stream music directly to Logitech Squeezebox, and play locally through WinAmp or iTunes.

To play music off the network, iTunes supports their DAAP protocol. This protocol lets an iTunes client share its media with other iTunes clients. In other words, you can have one iTunes have control of the media library and all the other clients simply get their information from there. One would imagine that the sharing issues mentioned above were eliminated then, but that is not the case. When iTunes connects to a peer or any other DAAP provider, such as a NAS drive, it shows the library as a list. You no longer have access to the user interface gems, such as cover flow and album grouping. With a DAAP client such as the open source initiative Firefly, it is possible to have some very smart playlists, though. But that is an entirely different discussion.

3 out of 5 for good effort, albeit lacking in remote control and library management. 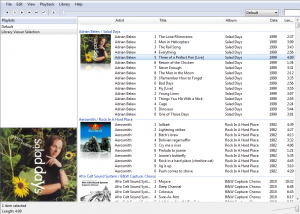 This program has been around since 2002 but only recently went out of beta. It is the brain child of Peter Pawlowski, and sports some rather impressive specs.

Foobar2000 supports all major audio formats, including Flac. Due to a well documented SDK and its long existance, Foobar2000 has an impressive backlog of third party plugins adding to its modularity. It is this modular architecture that is the strength of Foobar2000 but it also its biggest shortcoming.

Like iTunes, Foobar2000 can be remote controlled through plugins. The program itself cannot remote control another instance and the plugins are rudimentary at best. As for remote playback there is no support at all. German Rogue Amoeba has a product called Airfoil, which allows well behaved audio applications to route their sound to Airtunes. A short delay makes the experience a little cumbersome, but it works quite well.

Foobar2000 has no library management per se. It scans the media files it is told to and caches the information locally. If you change metadata, the changes are committed at once and the relevant files are updated. Nonetheless, navigation is responsive and filtering occurs immediately. And then it watches… Foobar2000 can monitor an arbitrary number of music folders and updates its cache as soon as a file is touched. It is, in other words, definitely possible to have multiple Foobar2000 clients running, watching the same folders and have them update each other with no user interference. Add to this, a brilliant properties editor and you have not only an excellent media player but also one of the best ID3 tag editors on the market.

As I mentioned, modularity is not all good. In all its configurability, Foobar2000 can break the neck of most users through its options alone. Sifting through its Preferences dialog, can make most people sweat, and as if that was not all, the user interface can be configured in minute details through a Live Edit mode. If you have the tennacity Foobar2000 is a wonderful product, though, and definitely a recommended try.

3 out of 5 for excellent library management and a gorgeous tag editor, but lacking in remoting. 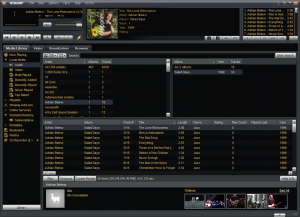 With almost 1½ decades on its bones WinAmp is the grand old man of media players. It wasn’t until 2007 and version 5.5 that the program became a true media center with album artwork and integrated library management. In its current incarnation, WinAmp is a potent player in its genre. It supports a multitude of audio formats, either generically or through plugins, including lossless audio in the form of Flac. Like Foobar2000, however, WinAmp suffers from too much going on and some visual setups that may be fitting a computer mainly used for programming rather than a dedicated media center.

The library manager included with WinAmp is good but not brilliant. You can manage your media inside the player and have it watch for folder changes, and that is that. Somewhat tucked away, however, is a library toolbox of sorts that lets you import libraries from iTunes, export the database or force a rescan of the files being monitored. That is nice.

There are a few remote control plugins for WinAmp but no indigenous support. As with Foobar2000 the plugins offer only rudimentary control. What you can get, however, is a plugin that adds support for Apple Airtunes. Once activated, you get access to your Airports from within WinAmp and can route your music there with only very little delay.

There is something called WinAmp Remote but that is not a remote control per se, but a system that allows you to play your own media files from a remote location, specifically a location outside your own, private network.

4 out of 5 for Eric Milles Remote Speaker plugin and a robust player, lacking mostly in actual remote control. 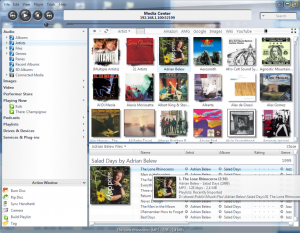 Like WinAmp J.River Media Center is a mature product that induces confidence. And like WinAmp it plays all sorts of media.

The user interface is well thought out and works equally well on a big ass touch screen or a small, discrete Mimo. And now to the big one: J.River Media Center can be remote controlled. It can remote control. It can serve. It can do stuff!

Set up a small, passively cooled PC near your stereo and give it good USB DAC to work with and a Mimo touch screen to operate it. Then multiply this with the number of stereos in your house. J.River Media Center comes with a server which runs on Windows. This you install on your Windows Home Server and on all your desktop computers you install the J.River Media Center client. You can now play music from your server at your desktop computers and/or your DIY media centers – and control it from anyone of them. Is that neat or what?

Unfortunately you cannot stream to Apple Airports unless you use Rogue Amoeba’s Airfoil. One day, perhaps, someone will write a plugin that lets you do it.

The library manager is complete. The properties editor matches that of Foobar2000 and in addition, J.River Media Center has a trick up its sleeve. If you edit a tag from a client, it can propagate those changes back to the server. Letting the server do all the managing means you don’t have to have more or less out of sync libraries scattered across your clients and you only send the information across your network you really need and thus save some bandwidth.

There are a few usability issues when connecting to other clients/servers that could do with a bit of polish. But that aside, J.River Media Center is a pretty nice product.

4 out of 5 for a near perfect media player really lacking only Airtunes support.