The Nuvo Music port is not an audio device in its own right but an add-on for their large music systems such as NuVo Grand Concerto and NuVo Essentia E6G. 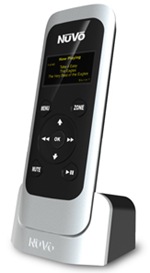 The Music Port is a hardware interface that connects a PC to the system and lets it not only control the NuVo systems but also act as a source. It even lets you collect music from other network places and aggregate them in one playlist. A PC with two 5.1 surround sound cards can then serve 6 streams and truly be a part of a cool setup.

With their new wireless controller, they are getting pretty close to some of the core features of the Sonos system fusing it with those of a home automation system. The infinitely spiffy Sonos remote is far from being in jeopardy, though, nor do I expect it to be anytime soon.