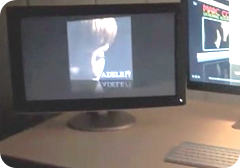 Since hardware vendors seem reluctant to put new stuff on the street at the moment, it is refreshing to see how audiophiles can help themselves. Chris Connaker of Computer Audiophile saw a parallel between the stunning Sooloos media controller and a humble Dell multi touch computer monitor. In his blog he explains how tweaking and poking, he fused a computer, the J. River Media Center and a Dell monitor into a home grown and very shiny Sooloos clone. As he himself readily admits, the Sooloos is of another world and not quite replicable. The idea, however, of having an easily navigable media center composed of off-the-shelf parts, is just plain wonderful in all its simplicity.

We have tried something similar ourselves, using an earlier generation resistive single touch monitor and Foobar2000. The problem with this setup was mostly lack of screen real estate, making an on-screen keyboard hard to use, and lack of slide response; it was just not easy to scroll. A better touch monitor, such as the Dell SX2210T used here, would have helped quite a bit. Another issue we had was lack of multi room support. This issue is present with the Sooloos clone too. With iTunes you can use Airports and have real time control of other rooms. The rigid implementation and lack of HD support makes iTunes an unattractive solution, though.

While we stuck with a good-quality-but-no-thrills soundcard, there are some high-end solutions that can make such a setup sound incredible.