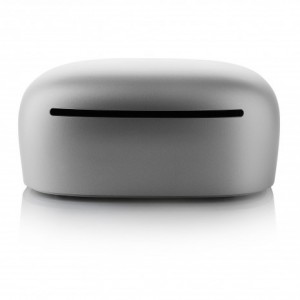 For those who have the rooms to suit a bit of soft, round fluffiness, Geneva Labs, known for their cubistic iPhone docks, have a streaming audio setup slightly out of the ordinary and certainly not a cubistic one. The system consists of an optional base station that receives FM and DAB radio as well as plays audio CDs, and two sizes of speakers, which placed on their polished steel stands, look quite the piece. 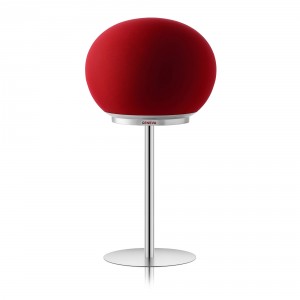 All components are nicely rounded and might as well be leftover props of Lost in Space. The speakers on their own will play AirTunes, Bluetooth audio and DLNA streams. When connected to a base station, it will play audio from there as well. The base station will feed up to 4 speakers, Platini the same ting simultanously. The output effect is not mentioned. Both speakers and base station have a line input for analogue sources. Unfortunately the base station isn’t capable of acting as a DLNA server. Otherwise it would have been a nifty add-on to many streaming systems that don’t have a CD player.