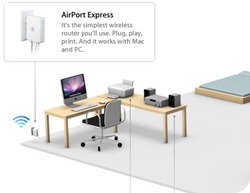 The Apple Airport Express is not new by a long shot, 6 years in fact, but it does sport a nice feature making it worth mentioning anyway, a feature I failed to mention when commenting on Apple TV: They act as a remote output through what Apple has aptly named Airtunes. You can select Airports and Apple TVs around the house when playing songs from iTunes and have them play through one or more simultaneously. What is more, it has a Toslink connector buried inside the miniscule output jack for a purely digital connection to your sound system, should it support it. Actually, the Toslink connector is much preferred over the analog output due to excessive and quite audible hum from the built-in power supply.

There are a few catches. You cannot kill a connection initiated by one computer from another, i.e. you cannot start your music from the computer in the office and then when you get to the kitchen, take a computer there and select another song. This can be a major hassle [to be very diplomatic] if you use more than a few computers. Also you are pretty much limited to playing music via iTunes. There are a few hacks out there allowing you to route sound from other applications to an Airport, such as Airfoil from Rogue Amoeba, but these tools are compromises. Particularly latency is a big issue, especially when watching video and routing the sound elsewhere. Applications competing for the Airtunes connection is another issue adding to the brew of annoyances. Having to manually kill a connection made by Airfoil to open one for iTunes is certainly not befitting my workflow.

Setting up an Airport is straight forward. With it comes a setup application that browses the network for Airports and lets you connect to whichever one you like and configure it. Should you have special needs in terms of authentication protocols or topologies it lets you handle that too, albeit considerably less elegantly.

The Apple Airport Express costs next to nothing so if you already use iTunes, this is a really cost efficient means to a distributed music system. Airtunes has some design flaws but works remarkably well considering.