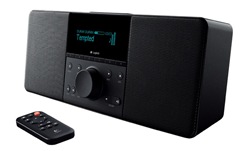 Adding to their Squeezebox line-up, Logitech has recently released their Squeezebox Boom. It uses the same technology as the Squeezebox Duet, in fact it can be controlled from the same remote and be a part of a system. Not entirely unlike the Sonos players that also come in a line-out unamplified version and one with a 50W power stage. The Squeezebox Boom just adds a pair of built-in speakers to make it an autonomous unit.

With specs like its sister device, sound quality is only limited to the quality of the amplifier and the miniscule speakers which, incidentally, sound incredibly good for their size. There is a 7-day alarm clock [with a built-in snooze button, no less] and automatic dimming of the display, making this perfect for a bedroom setup.

First impressions are that of a solid device. It is heavy and feels rather rugged in its rubbery front panel covering and shiny cabinet. Buttons operate smoothly and the remote, however small, feels good even in large hands and has quite a good reach. The display may seem old fashioned but the fact is that this type of Nixie-look-a-like display works very well in a dimly lit room, where color LCDs have a tendency to be overly bright. In addition to the ever present Squeezebox controls, the front panel offers 6 preset buttons that can be programmed directly from the device or from a Squeezebox Server using the KidsPlay plugin. Using this plugin gives you an almost unbelievable amount of programming options, such as (but all but limited to) choosing a random mix of tracks of a given genre while showing a brief message on the display as to which genre that is while clearing previous playlist selections. Nice, eh? In fact, it is difficult not to fiddle.

Should you need to, the Squeezebox Boom can be mounted in several positions with an optional L-bracket.