The people who gave us the NaimUnity last year have gone and done it again. This time with a cute little device aptly and cleverly named The UnitiQute. The main difference from the NaimUnity is the absence of a CD transport. In other words, the UnitiQute is for those who don’t care about perloid plastic discs or those who have a plenty of sound elsewhere and needs an extension.

The front is sleek and minimalistic and very Naim.  The back panel abundant with connectors for all things digital and a few analogue for good measure. The UnitiQute streams from internet radio stations and from network storage devices, be it a regular NAS or that equally sleek Naim HDX in the living room. In addition to networked music, the UnitiQute plays music from attached devices, such as iPods and USB harddrives.

Flac support of up to 24bit/96KHz puts it well in the clear with the competition. With a built-in amplifier yielding 30W of smooth niceness it is fairly self contained and should fit any small living area. Put an HDX in the study with your Focals, a Unity in the living room and a Qute in the bed room and your retirement is pretty much secured.

I may be pushing the icons above a bit on this one, since Linn has not yet disclosed anything specific on their new compact. Following in the footsteps of Naim and their Uniti, Linn has gone and committed a similar product. A complete unit, albeit sans the radio and the transport. Okay, so it isn’t a complete system. It does, however, appear that the Linn Majik DS-I has everything in the realm of in- and output. Even a phono input. All you need is a tuner for the BBC must-haves, a CD transport for the not-yet-ripped CDs and a pair of speakers that can receive the angel dust from the DS and sprinkle your abode with magic. 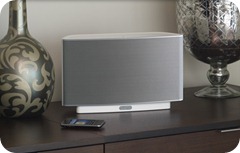 Sonos have ruled the streaming kingdom seemingly for eternities now but have been subjected to more and more frequent bashings for stubbornly sticking to less than standalone-friendly ZonePlayers. In others words: Why don’t they make a real standalone player for the kitchen (or wherever this makes sense)? Now they have… The ZonePlayer S5 is one such thing. A monolithic heat fan from appearance; a well spec’ed transistor radio beneath.

Each driven by a D-class amplifier of unknown grandeur 5 drivers form the bessel. One of these is a 3½” center positioned subwoofer [remember 3½” floppy disks? Woof!]. Otherwise it appears to be spec’ed like its brethren ZonePlayers. Like these the S5 can be controlled by the dedicated CR100 or Cr200 controllers, or from a PC or an iPhone. 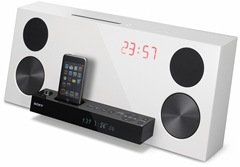 Naim have always been associated with extreme high end and baffled the world not long ago when they extended their product line to Bentley in-car hifi with KW-fed 11 speaker extravaganza and a price tag to fit the car. Well, none of that. Now Naim went out and did an all-in-one package for the home sporting some rather nice specs and a compactness leaving little else to be desired.

The NaimUniti is a 50W integrated FM/DAB receiver with built-in CD transport and internet connectivity. It accepts USB devices, controls an iPod, reads CD-R discs and streams music from the network, including internet radio stations. Ogg Vorbis and Flac are supported as is Apple Lossless. On the input side there are 5 digital and 4 analogue. The latter including one specifically for the Naim Stageline phono stage for all that vinyl screaming for attention and so often forgotten in other solutions.

The RipNAS is not an audio streamer per this blog’s usual definition but a uPnP compatible server based on Microsoft Windows Home Server. Devices that are compatible with the uPnP standard can then connect to the RipNAS and use it for storage. What makes the device stand out is its built-in optical drive that lets you rip automatically to a number of audio formats, including Flac. Just insert a CD and rip away. The device comes preconfigured with 320GB, 640GB or 1TB harddrives and can be extended with a matching external drive to up to 7TB. That should suffice for all but the most extreme of needs.

For streaming the device supports Logitech SqueezeCenter, Sonos , iTunes and uPnP. Also it connects automatically to such services as freedb and MusicBrainz for tagging music. Needless to say; since it is a Windows Home Server you can install just about any piece of software you can think of, such as automated backup of music or online purchases. Indeed, the server can be used simply as a Windows file server.

Sporting a wifi connection, wired ethernet and FM reception, this internet radio is very much that; an internet radio. A slick design centered around a pretty colour display and cool navigation controls paired with uPNP support and self sufficiency makes this a very attractive kitchen music piece, in so far that kitchen can mean just about any room in the house not equipped with a stereo system. It is yet unclear which media formats are supported.

I mentioned the Kupuk Zones a while back; an application for the Apple iPhone / iPod Touch that lets you control the Sonos Zone Players. Now Sonos themselves have released a zone controller for the iPhone. The reactions in the community the last couple of days have been hurrayingly positive and admittedly the logic of having Sonos themselves do the development would by itself be enough to warrant such a reaction. Now they only need to release a Zone Player application for PC and Mac to keep their shareholders a tad on the fringe.

Behind a very long name lies a sleek, if somewhat conservative looking music server split in two – a desktop chassis with a CD-drive and a 15” or 17” touch screen. It supports 4 distinct zones that can be controlled separately, either from the touch screen or from a 3rd party remote [presumably via uPnP]. The server comes in 4 flavours from 250GB to 1.5TB. Files can be stored in lossless format and there is a digital output for attaching an external DAC at a resolution of up to 24bit/192KHz.

From the more unusual side of the feature set, we find not only CD burning but downscaling for iPod playlists and direct purchasing and download from Music Giants at full resolution. Not to mention the ability to play 1-second samples of arbitrary songs without interrupting whatever else is playing [except, of course, for the played sound sample].